At the traditional New Year’s Reception of the State Government, Bavaria’s Prime Minister Horst Seehofer greeted about 1700 invited guests at his Munich residence on 12.01.2018. The Bavarian Cabinet, as well as guests and celebrities from the fields of economy, politics, culture, sports and society, were among those present.

Traditionally, the New Year’s Reception is the highlight of the socio-political year in Bavaria. The event started with Prime Minister Seehofer addressing his guests in the Imperial Hall with a welcoming speech. Later, the Prime Minister and his wife met with guests from all the regions of Bavaria. The New Year was also musically welcomed in with a serenade performed by the Bavarian Police Orchestra. 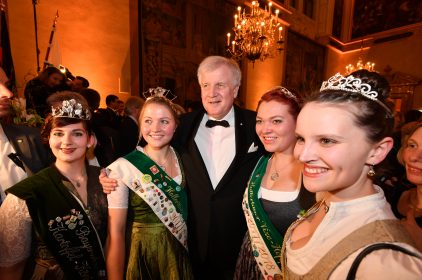 The Munich branch of Brähler Convention was commissioned with the technical planning and execution of the event.

Good sound systems, lighting equipment and video systems were used in all the rooms of the building. Our technology specialists ensured that this important political event ran smoothly.

Impressions of this event can be found on the Youtube channel of the State Government of Bavaria: https://www.youtube.com/watch?v=0pAMtCtOCD4