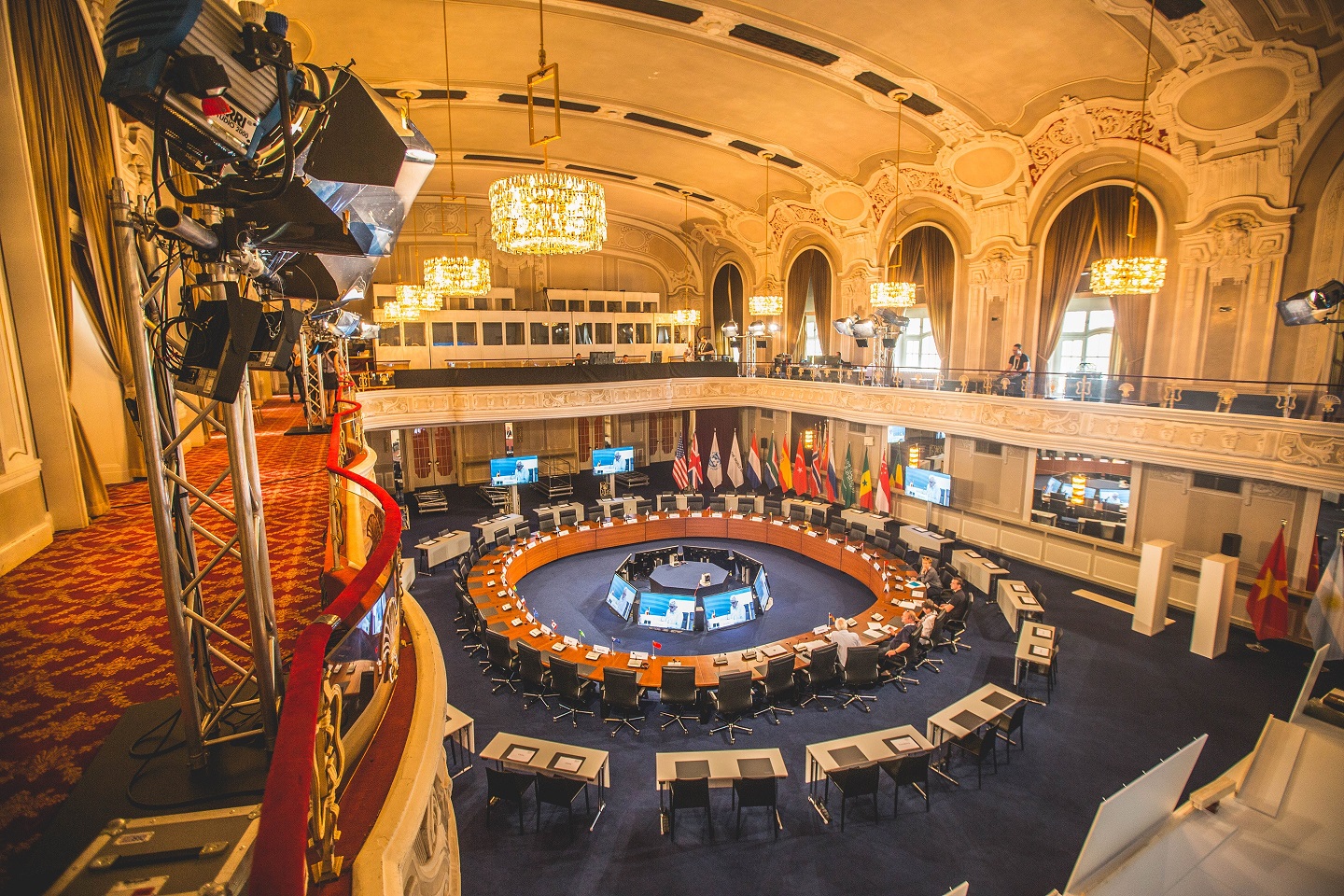 The ministers for employment and social affairs from the twenty largest industrialised and emerging nations convened in Bad Neuenahr on 18 and 19 May 2017.

Our Brähler Convention headquarter was booked as the full-service technical provider to arrange all technical preparations and perform all technical work for the political event. The customer received a consultation beforehand, concepts were formulated, and the technical plans were finally drawn up and implemented. From preparation to follow-up, our staff from Königswinter were fully committed to the task, handling with utmost care.

What exactly were the services rendered? We’ll give you a brief look behind the scenes of this political event through our case study:

Brähler provided 13 interpreter booths in the conference room, for languages such as Arabic, Chinese, English, French, Indonesian, Italian, Japanese, Korean, Portuguese, Russian, Spanish and Turkish. It set up 40 desktop intercom units onto which these 13 languages were transmitted. A dial on the unit enabled the desired language to be received directly via the headset. There were also 250 wireless infrared receiver units.

The German press conference, attended by national and international media, was interpreted into English, Spanish and Chinese. 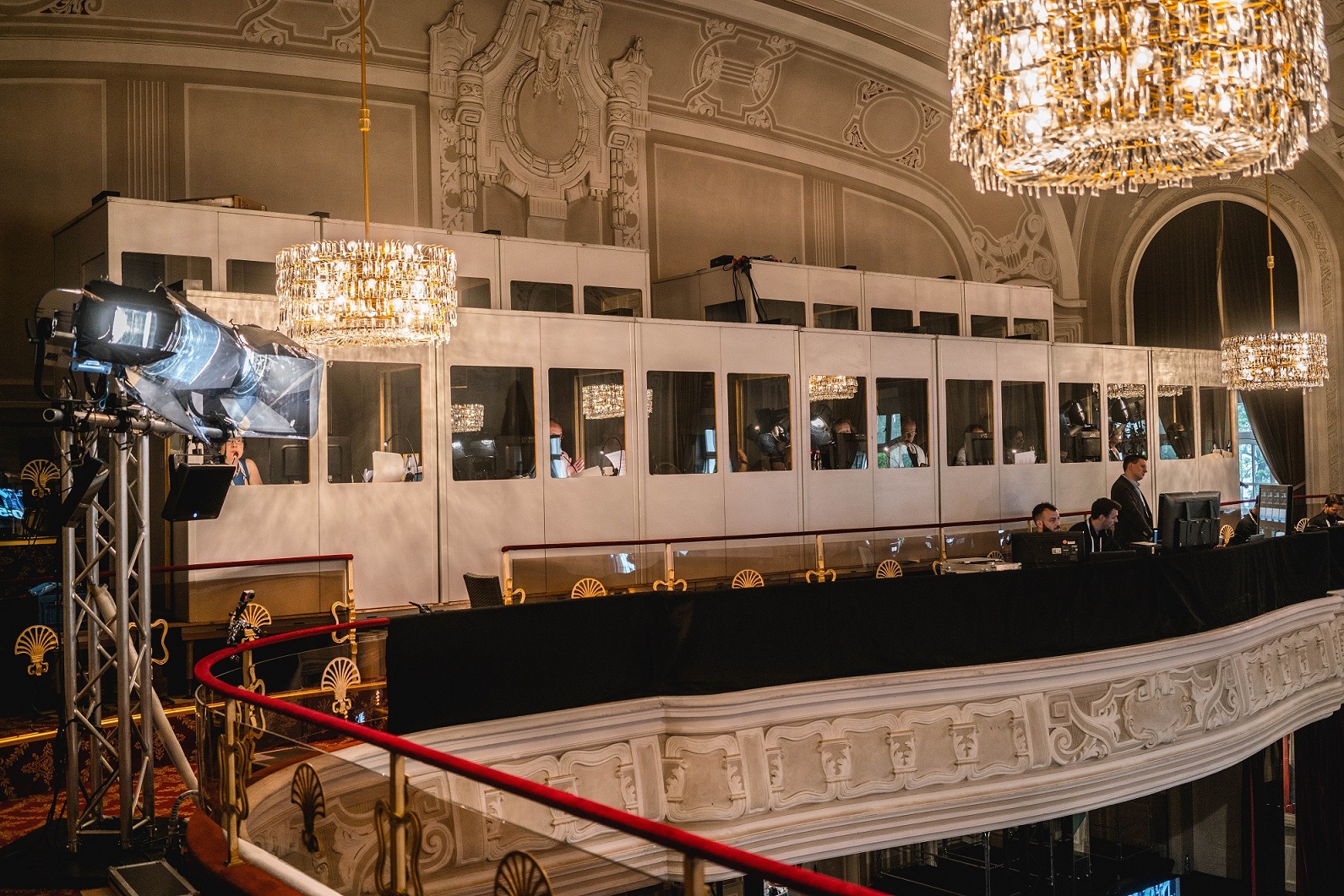 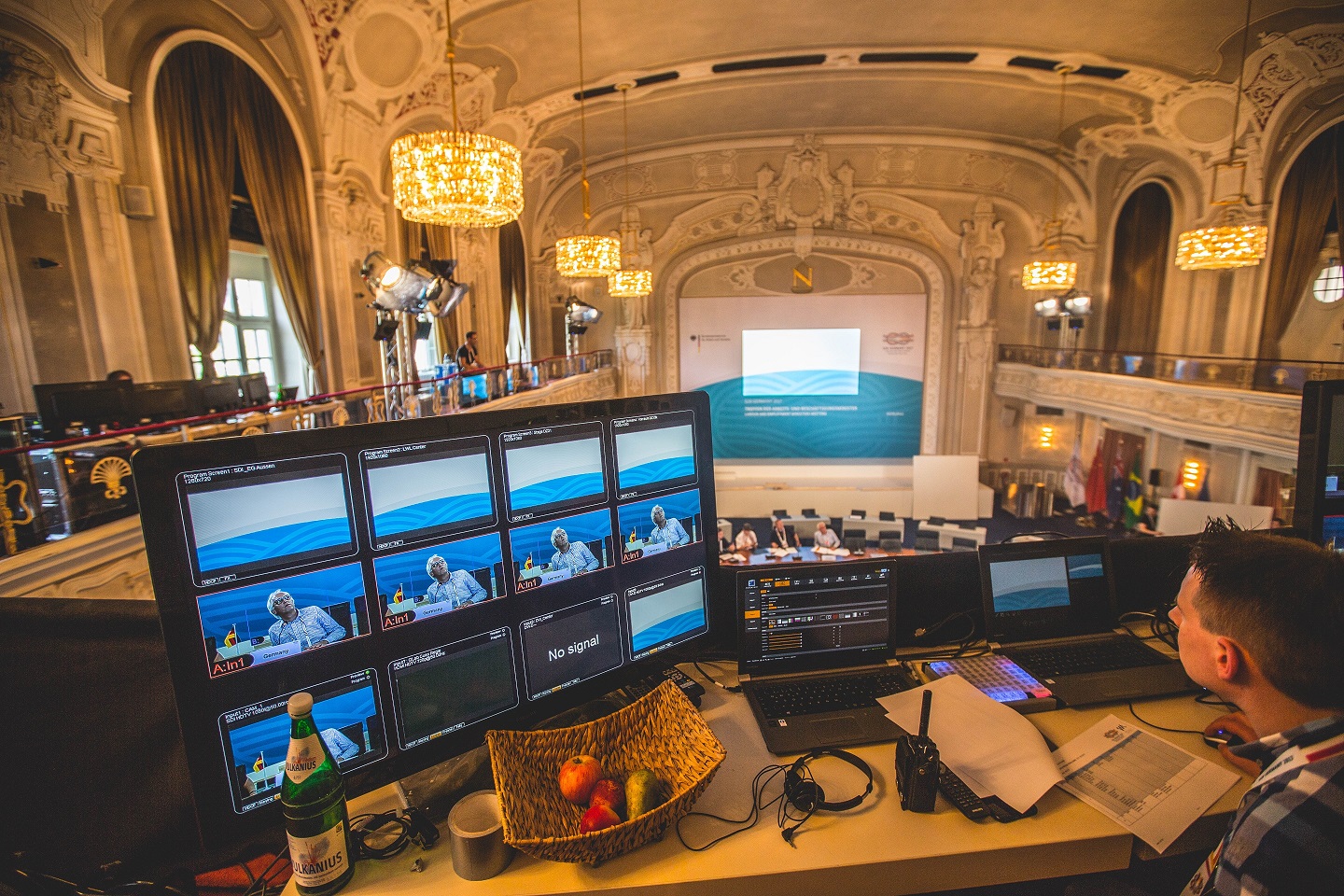 A large screen with rear projection provided displayed the conference documents perfectly. A preliminary meeting was held three days before the main meeting, and involved setting up an additional three screens with short-throw projector. These are used in small spaces, but still provide top projection quality despite their short distance from the screen.

Two cameras positioned in the middle of the conference room broadcast the meeting to an overflow room, where 200 delegates were able to follow proceedings. The spoken language was additionally transmitted to the receivers in this room. All processes were controlled by our direction experts.

Eight 55-inch displays projecting the conference documents were set up as part of the round-table discussion.

The lights chosen were designed to reflect a respectable, professional conference atmosphere. Six additional light towers were set up to provide optimum lighting for the camera.

Stages for press photos were set up indoors and outdoors. 800 sq m of carpet and a false floor were also laid to ensure cable conduits were not visible. A signposting system was installed throughout the entire venue, featuring five screens showing signposting content and 30 stand-up displays with arrow systems. 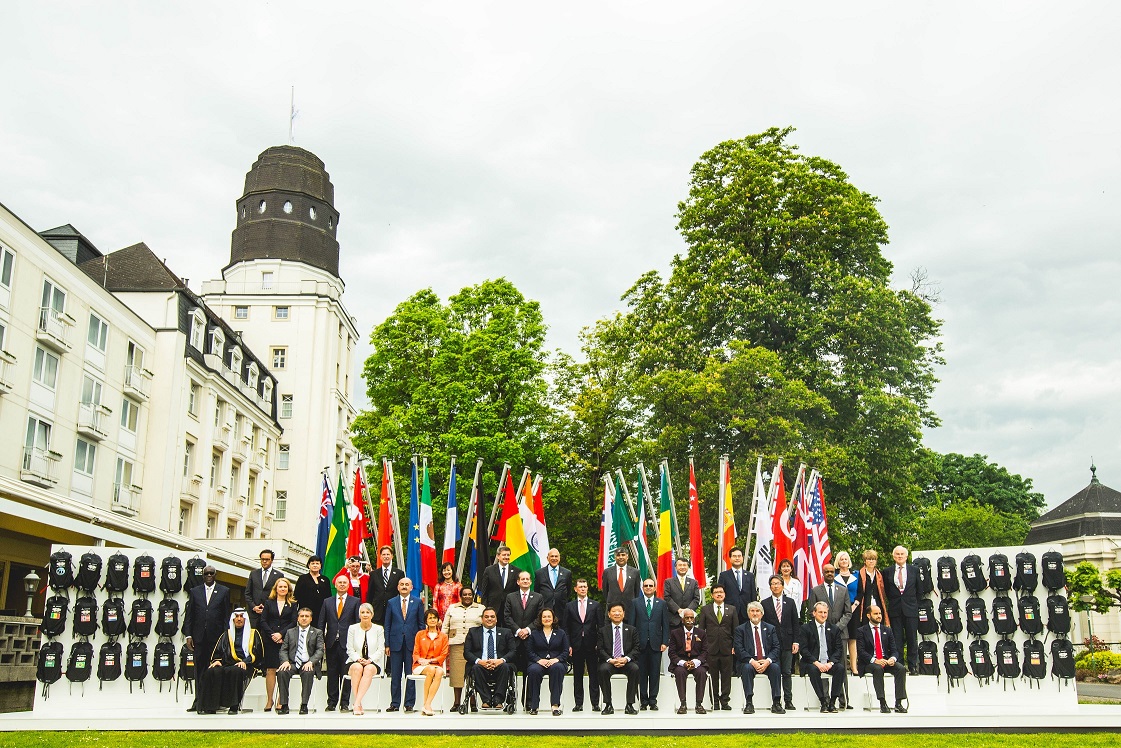 4. Professionals and specialists for the perfect customer service

A total of 30 Brähler Convention professionals worked on the G20 summit. They were responsible for setting up, dismantling, and ensuring smooth operations during the conference. One staff member took charge of technical management and co-ordinated all processes and staff. A second member was assigned purely customer-service duties, handling all requests arising during the hectic preparation phase. 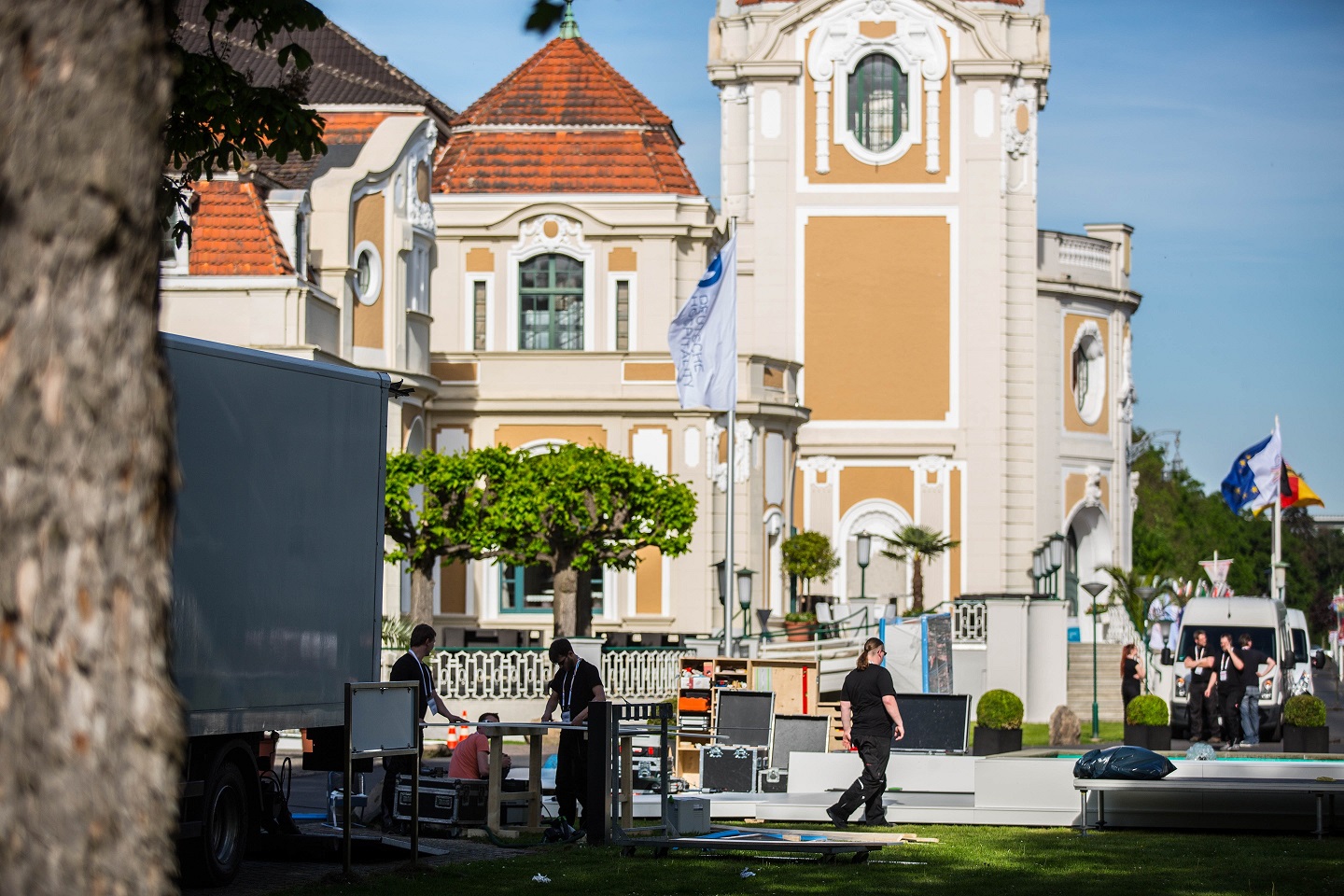 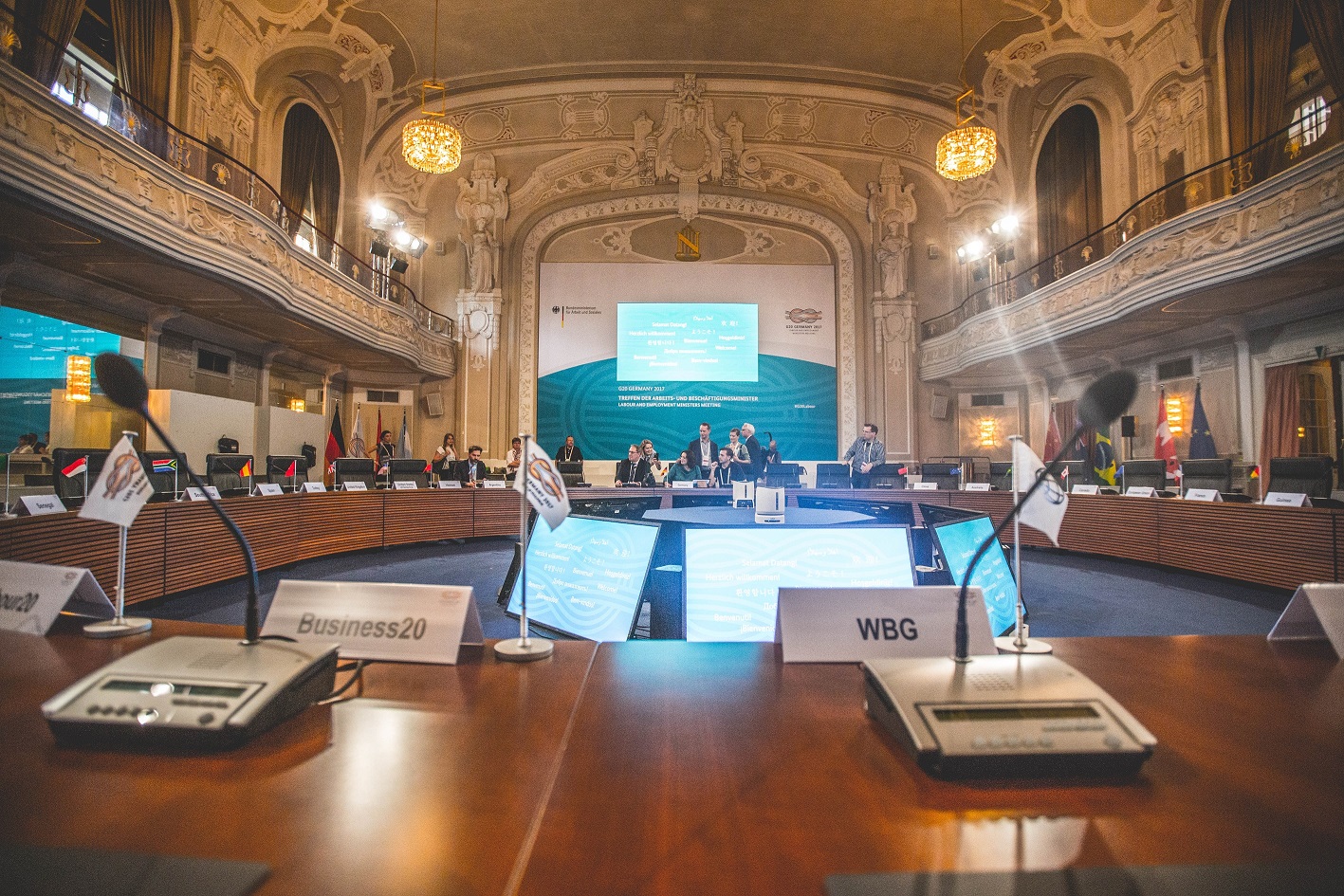 Our project manager Philipp Bauch sums up the G20 week as follows:

“We always love being able to work on such exciting customer projects.

we put into them in the lead-up.”

A total of 16 tonnes of technical equipment was installed, plus 25 tonnes for the exhibition centre setup. We planned and organised the entire event to be accessible – with ramps and hoists on the stages. To finish things off, the Steigenberger Hotel in Bad Neuenahr was branded in the G20 meeting’s corporate identity – an interesting event demanding the full expertise of our staff!

Do you too want to organise an event requiring top quality? Then we look forward to hearing from you! Our staff are always glad to meet you for a consultation.