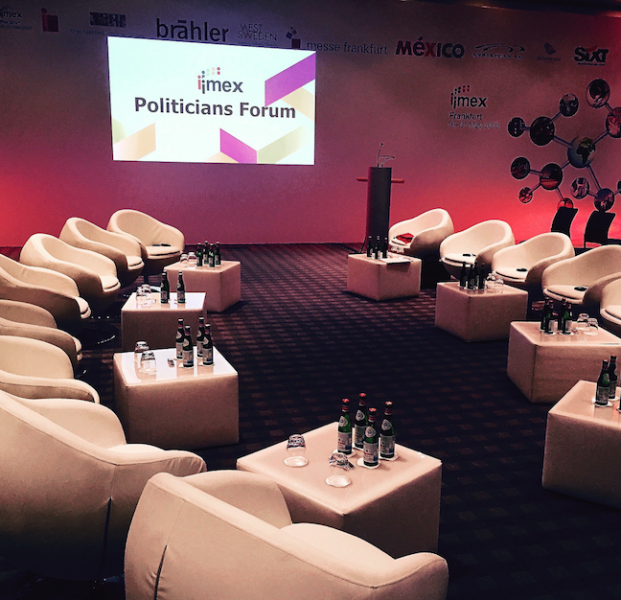 Also this year, Brähler Convention has been responsible for the entire event and conference technology of the IMEX Politicians Forum. This prestigious event is held annually in Frankfurt during the IMEX, trade fair of the MICE industry. The IMEX Politicians Forum is the cornerstone of IMEX’s Politicians Program and has become the most important and influential event of its kind, committed to uniting the industry to communicate and reinforce the beyond tourism, social and economic impact of meetings and events to governments and showcasing how meetings and events translate into economic business activity, job and tax revenues.

The Forum provides a platform for global meetings industry leaders to meet with national and regional politicians and government officials from around the world to share best practice and discuss ways to secure economic, social and reputational dividends that result from hosting meetings and events.

Brähler Convention was responsible for the event and conference technology and thus placed the trades stand construction, lighting, audio, presentation equipment and conference technology. In addition to a 16m wide, specially for this event printed setback, which also served as a projection screen, a total of 20 wireless microphones of the Sennheiser 2000 series were used.

These were flexibly used with up to 17 Sennheiser SKM 2000 hand-held transmitters and 6 Sennheiser SK 2000 beltpacks with DPA clip microphones. For the hand-held transmitters, Sennheiser MMK 965 condenser capsules were used with switchable directional characteristic. As mixing console a Yamaha QL1 came into process with a RIO 1608 Stagebox to be able to manage 28 inputs in total. The projection was implemented in full HD with a Panasonic PT-DZ 6700, in front of whom a Barco DCS 200 was switched as Seamless Switch. The next-click procedure of the presentations took place over a D San Perfect Cue.

Again, we may reflect on a successful cooperation with IMEX and look joyfully into the future.